Reflection written by Nia from the 2016 exchange program with Hanyang University in Seoul. 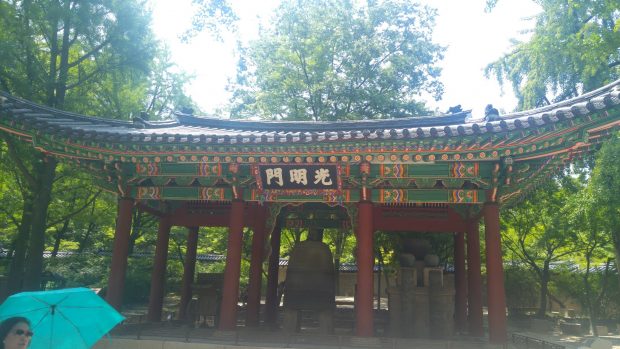 As I try to re-acclimate myself back into American life, my time in Korea is always on my mind. A vivid memory so clear that I sometimes wonder if I’m still there. Only instead I am back home, and my trip has ended as well. In the short month that I was there, I came to understand many new things about myself, about the world in general. I am now able to understand that the world is at my fingertips if I allow it to be. Instead of being afraid of the unknown, being able to have an open mind and take the first steps to exploring the world is what inspired me to study abroad.

Even though I only had one month in South Korea, being exposed to new places, new people, a new language and overall, just a new way of living that I had never seen before. A place so far away from home became normal to me in such a short amount of time. I had times when I had to rely on myself instead of calling on my parents. I gained a sense of independence, knowing that I can handle myself out in the world even when things don’t always go as planned. I became more self-aware of my capabilities as a functioning adult in society. That even without my mother to hold my hand, I wasn’t quick to not crumble under the shock. Instead, I even surprised myself in that I was able to rise to the occasion and enjoy myself even forgetting about the initial “what if’s” that dawned in my subconscious.

For one, getting the chance to be immersed firsthand in a new culture allowed me to understand better the country I was so interested in for years. No longer was Korea just the land of K-pop or Dramas, on the contrary, I got the chance to interact and live amongst the everyday people and see the reality of the place in which I believed I knew so much about. Allowing myself to see Korea as what it is instead of just the glamorous entertainment center of my interest was very eye opening. In other words, I learned that Korea is so much more, there are so many layers to Korean society and culture that for a longer time, I wasn’t mindful of in my never ending quest to find the latest variety show episode. The people, the food, the customs all were what I saw firsthand in Korea, something that I could have never truly gotten from the other side of a computer screen.

Also, I found that my original belief of a month being a long time quickly became false. Once I became accustomed to my everyday routine of life in Korea, time passed and before I knew it, I was on a plane ride home. I felt as though I wanted to do more, see more, experience more and the time I thought would be long, only felt like a quick passing of a week or two. I learned that once you get used to the feeling of not being at the comfort of home, time moves much faster. I would have loved to visit more monuments and visit more museums I was so excited to go to but I felt like my experience was one of a kind. The entire time I felt like I was able to escape that small bubble called home and delve into the unfamiliar. The getting lost and making mistakes was my way of learning and adapting to my new surroundings and gave me the tools I needed that will prepare me for my future without a doubt. There are no words that can put into feeling just how important this trip meant to me.

Although it passed by quick, I was able to appreciate the culture and the country as a whole as well as see America from a different perspective. This trip didn’t just allow me to uncover the rich layers of Korean life from a different perspective than I had previously, but also it allowed me to have more confidence in myself and my skills. Reassurance that I can handle situations myself and that I can come out of them with knowledge that can carry me further into adulthood. Studying abroad was one of the best decisions I chose to make. This journey was just the beginning of my travels that will for sure be the groundwork for my future endeavors across the globe.